Looks like the summer expansion is gearing up to be a big shake-up for industry.  First, big reprocessing changes, and now big manufacturing changes.

Most of the major points are easy to understand.


The unifying theme to watch in these devblogs is nothing will be free in industry any more.  Refining will have variable yields depending on space/equipment, but never be 100%.  NPC manufacturing will have meaningful costs to production above-and-beyond raw materials.  There are no more free lunches.

Before I get into my review, I want to start with a TL;DR: The proposed changes are bad for cooperative industry and strongly incentivize solo industry as-is.  Though the changes aren't a catastrophe for corp-level/frontier industry, a lot of the changes will make many of the tools people use difficult.  I will cover my complaints in depth at the end of this post, but changes as they exist in the dev blog have me worried.

Slots, as we know/hate them, are going away.  They will be replaced with a "cost scaling system".  TL;DR: you will be able to install a job anywhere that has science/industry services today, but will have to pay varying fees as a % of base cost.  What hasn't been explained yet is how this will affect POS.  More info will come out soon(tm) I am sure about the POS design.

Personally, I'm a fan of this for the most part.  Outside a few corner cases (newbie systems, outposts), I think the change is good.  NPC slot scarcity has been an unnecessary bottleneck on production.  It has pushed a lot of casual players out of the market, and left a "POS or GTFO" attitude.   Also, with a raw ISK cost, it should be obvious to producers what is impacting their bottom line.  This should stomp down some of the "time is free" attitudes out there.  I'd still like to see a time efficiency mechanic in station lines... as the lines get more crowded, overall productivity drops, but I can take what is given here.

In a one-two-punch, not only are in-station industry resources going to become less constrained, POS ownership is going to become much easier.  All limits to anchoring a POS are being removed.  This means a tower can be dropped by a corp in any security (except special systems, same as POCO restriction), with no standings requirement.
I am a pretty big fan of this change.  It means we should see a dramatic decrease in moon-holding POS.  It will be much easier to get a moon, and use it or lose it.  There will still be a war requirement to clear towers, and regions with hubs will still be prime real estate, but those willing to compromise should be able to get POS a lot easier.

The unintended consequence here is when you remove slots, what will that do to industry POS?  POS layout has been a game of getting the slots you need and paying with CPU... if equipment needs are being decreased, will there be more dickstars?  Less POS?  More info about POS changes are promised in a later devblog, so we'll see.

This is the crux of my unease with the proposed changes.  BPs in stations will not be accessible in POS.  Though this increases the risk to loss in a war (net good change), it makes corp theft a MUCH LARGER problem.  With how little control corp roles give you at a POS, if something needs to be moved between labs for work (Copy-->Manufacture, Invention-->Manufacture, Research-->Manufacture) then people need take rights.  And either you're stuck with a wild-west "anyone with POS access can take" rights scheme, or "only ultra-trusted members can move crap around for people".

With copy bandwidth/availability going up substantially, it's easy to say "just risk copies", but there are a bunch of unintended consequences with those changes.  Imagine my T2 component library: 10x of each component BPO.  That library took a long time to research.  Should I be spending money/time on copies or put the library at risk in a POS?  If I go with copies, I could very easily blow past the 1500 items/hangar limits, leaving me with more logistical headaches than security.  If I am spending my time copying all these BPOs, when will there be time to invent the T2 stuff?  My choice is to bring in help for copy bandwidth, or lock out people for BPO security.

If you put your BPO in the POS, you could be out those originals.  If you put a pile of copies there instead, you could have that time stolen from you.  There is no good way to keep a modicum of security at a POS without a lot of overhead for managers.  Couple this headache with the very low bar to owning a new POS, it stands to be much easier to give yourself a solo corp where those BPOs can't be stolen than cooperate with internet strangers at the risk of a library that could have years of research in it.

What Should Be Changed

Let me boil it down again: I should not be afraid of my corp members.  A properly configured corporation should be able to secure its assets to view/take at appropriate levels.  What made this work up to now is that anything super-valuable could be secured using the Lockdown mechanic.  This meant the BPO was still usable from station for research/mfg, but it couldn't be moved without a corporate vote.  As CEO, I can volunteer my pricey BPOs, but sleep well at night knowing that only I can unlock them for moving.

With this change, I can risk my BPO at POS to wardec, but the much greater risk is the team that needs access to them.  If I can get to a sufficient level of pseudo lockdown (pw protected, or no need to move prints around the POS) to keep my members from taking those BPOs, then I'm more than happy to share.  If I am stuck with a mountain of copies as my only recourse, then I will opt not to share, instead locking my friends out of my POS with the tools at hand.

Also, time will tell, but I am not super enthusiastic about the new UI spoiler... unless batch install is part of the feature. 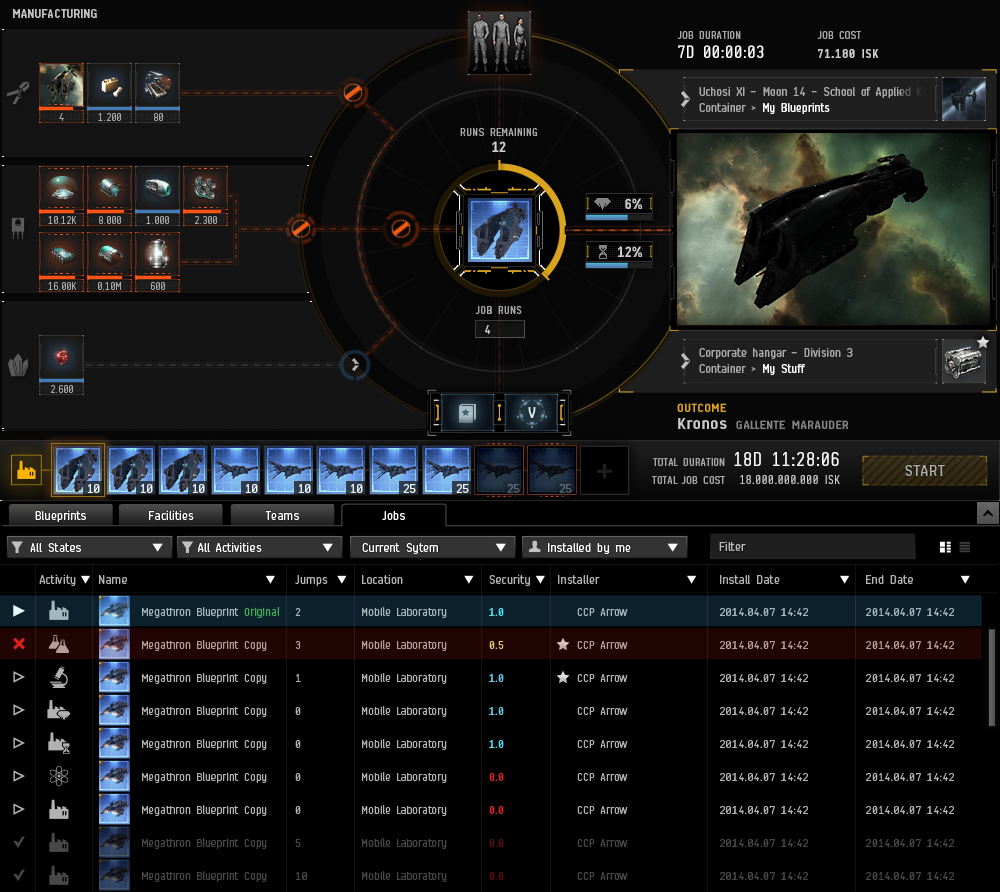 Highsec dickstars will be a bright and shining wardec invitation, now that Marauders are immune to ewar. Three marauders and a support fleet in case anyone actually shows up to defend and you've got a dead tower.

They will still need a wardec to clear the POS.

I am perfectly fine with the PVP risk. It's appropriately avoidable in my mind. Hopefully the ease of putting down a tower and higher overall efficiency of those towers will balance out the demand for moons.

Thankfully, my towers aren't in a screamingly popular region nor a system with NPC copy space.

Required Wardecs: absolutely, but that's always been true in highsec.

My point was the very idea of a dickstar as a viable POS-defense strategy is something that was quietly killed when the new Marauders were introduced.

For all practical purposes, the only place a pure-jammer POS defense is still viable is a C1 wormhole.

Anyone who puts ECM on their HS dickstar is looking for trouble. The best defense for a HS tower is as many hardeners as you can muster. Make the manhours not worth the reward.

With the standings requirement gone, you could always just un-anchor the tower and put it up somewhere else if your corp got decced. You wouldn't have to go through the aggravation of having members with low faction standing temporarily jump out so you could re-anchor.

Of course, with the lifting of the standings restriction, more corps will be able to put up POSes, so a person who un-anchors theirs could have a tough time finding another spot.

I had not realized this - it seemingly does invalidate that defence strategy doesn't it? The Caldari POS may no longer be the obvious choice...

A dev posted that you would be able to remote start blueprints from containers. Would a secure container at the POS help with the security issue?

The problem is with the "take" right.

If BPOs have to move between two POS modules to be effectively used, then I either need 2x the BPOs or trust that people will not steal them in transit between labs.

The other issues of take rights can be mitigated with most of the rights in game today. A suitable solution would be a "library" module that BPOs could be at-risk in space, but would not need to move from that library. Even if that's 1-per-tower, I'd be reasonably okay.

Maybe I misunderstood... Hope not because it would be a reasonable solution.

The way I read the press was:

To use any BP at a POS, it need to be on the "hangar floor" of the POS module. Even if they add secure container access, that doesn't address my issue.

Imagine I have 2 build arrays. I want to install some BPOs in the first, so I drop them in the module hangar and install. If I then want to (on another character) build more in a second module, I have to move the BPOs to the second array.

THIS is the operation that is risky. To enable that, I have to entrust that second character with "take" rights. It's functionally the same to move BPOs between labs as it is to move them into your hangar.

Ugh, I hope that's not it. Far too much pointless clicking as well as the security issue.

Really the trick is to unanchor it, fly to station, switch to corp2, fly back reanchor with the new corp...

relies on there being an open moon nearby... and if you are in a valuable system, that probably won't be an option.

I am sure that most of the smarter industrialists will see the same risk to wardec (with way lower coward costs), but the ambitious trying to use a system with research and manufacturing NPC stations will get a lot more threats.