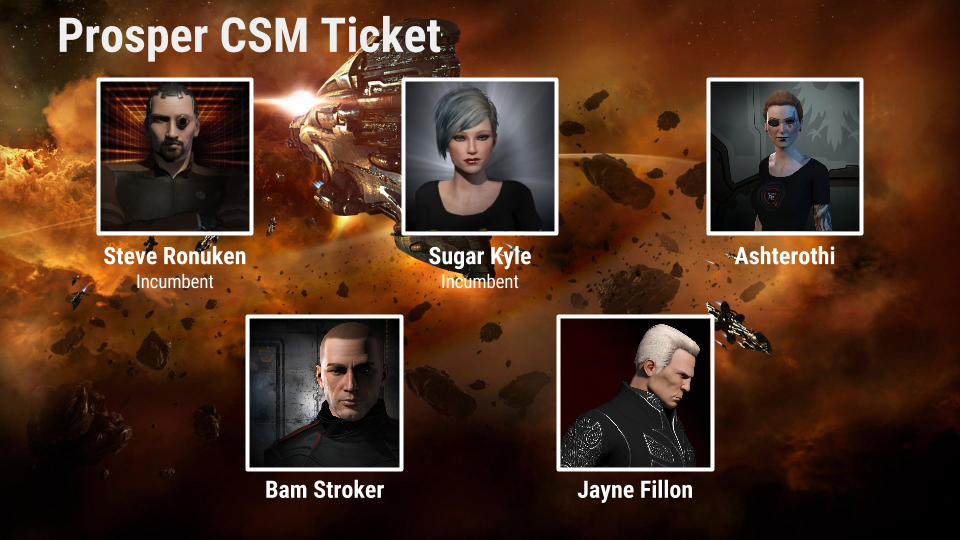 With the last Cap Stable Analysis Show released and voting slated to open in a few hours, I wanted to finalize my endorsements for CSM.  And some time in the next week or so, also expect to see a sooth-saying meta-review of my personal CSMX predictions.  I have not yet finalized how I want to talk about my "hoped" CSM vs "expected" CSM.  Lastly, I'd like to do a talk about CSM campaigning, but I don't know if that will see the light of day.

Also, as a great resource, CCP Leeloo has released an official CSM listing. Also, my list is by no means a full list (5 of 14 slots), and an STV refresher is posted below.

Steve has to be my #1 choice.  A common theme among the Candidate Interviews was a call for more tools, but very few of those requests were coming from developers.  Steve Ronuken is an amazing resource in the #devfleet, and is unparalleled in knowledge about API/CREST/SDE/tools support and development.  My work would not be possible without the tireless work of people like Steve.

The only time I've heard anyone say to not vote for Steve Ronuken was Marc Scaurus joking "CCP should just hire him as a full time dev".  But I like having such a reachable, active, knowledgeable 3rd party developer representative on the CSM, and Steve is completely unmatched.  If you at all support the call for "more tools", those calls are impossible to answer without Steve Ronuken.

I cannot say enough good things about Sugar Kyle.  She has received nearly unanimous endorsement from her peers and fellow candidates.  She has also earned the reputation as the hardest working CSM member in CSM9.  No one pounds pavement like Sugar Kyle, and no one engages with the entire playerbase like Sugar Kyle.  I will be astounded if she does not lock in one of the two "permanent attendee" seats on CSMX.

I'm especially evangelical for Sugar Kyle because she's such an avid supporter of all things lowsec.  Having lived in Gallente FW for nearly the last year, she not only represents my playstyle in game, but also deeply understands so many of the connected game systems.  If your fear is that SOV will steamroll other facets of the game, Sugar Kyle deserves a place on your ballot to defend nearly every playstyle outside of SOV.  Otherwise, she has an amazing track record for engaging with all sides to really grow her understanding and lock in a smart position.

Cohost on Hydrostatic, Ashterothi jumped on the CSM race a bit later than I would have liked, but I have been helping run his campaign along with fellow co-host Phyridean.  Ashterothi is running on a very unique platform of servicing things like NPE and minigames like hacking, while also being the only full-blooded lore candidate I've seen running.  He also makes it onto my endorsement list because he has IRL experience with tool development, and I hope that he can help share the load with Steve Ronuken as a team effort on 3rd party dev topics.

With an expected docket beyond just corp/SOV/POS changes, I think Ashterothi will be a strong teammate to have at the table along with the other strong candidates and incumbents.  The thing standing between Ashterothi and a seat on CSMX is his late start making it an uphill battle to get the votes needed to run in this extremely competitive field.  If you support any of Ashterothi's platforms, I strongly encourage you to put him high on your ticket.

Bam is another late addition to my endorsement list.  EVE meet organizer extraordinaire, there is no one higher on my list for player-to-dev connection and interaction.  I invite you to listen to our interview from Hydrostatic, this guy is a meet making machine.   Also he helped bring up the site EVEmeet.net and organized EVE Down Under, Bam's focus is on growing and engaging the community.

Though there are a decent group of other community-centered candidates, Bam rises to the top of my list for his selfless dedication to making those connections happen.  Also, I would like to see more representation from the wider spread communities out of US/UK/Scandinavia, and Bam being such a pivotal part of the AU community really seals the deal for me.

Jayne takes my last endorsement for his service to the NPSI community.  The CSM9 winter summit broke open the doors for talking about non-corp/non-alliance in-game support structures.  Living in FW, I see first-hand the pain of trying to keep together a loose collection of individuals, I can only imagine the heartburn from coordinating a coalition or NPSI community like Bomber's Bar or Spetre Fleet.

Though a lot of candidates pooled under the NPSI banner, Jayne rose to the top of crowd in my opinion.  Again, beyond the expected SOV/POS/corp changes in the next ~6months, there will be opportunities to focus on wider engagement problems that will help connect more people.  Where I endorsed Bam for his ability to reach people out of game, I'm endorsing Jayne for his ability to reach them in-game.  I especially like the impromptu and network building that the NPSI communities have fostered so much in the last couple years.
Posted by Unknown at 9:01 PM

Email ThisBlogThis!Share to TwitterShare to FacebookShare to Pinterest
Labels: nopodcast

Lockfox, I did not think I could adore you more. CP Grey for the win \O/