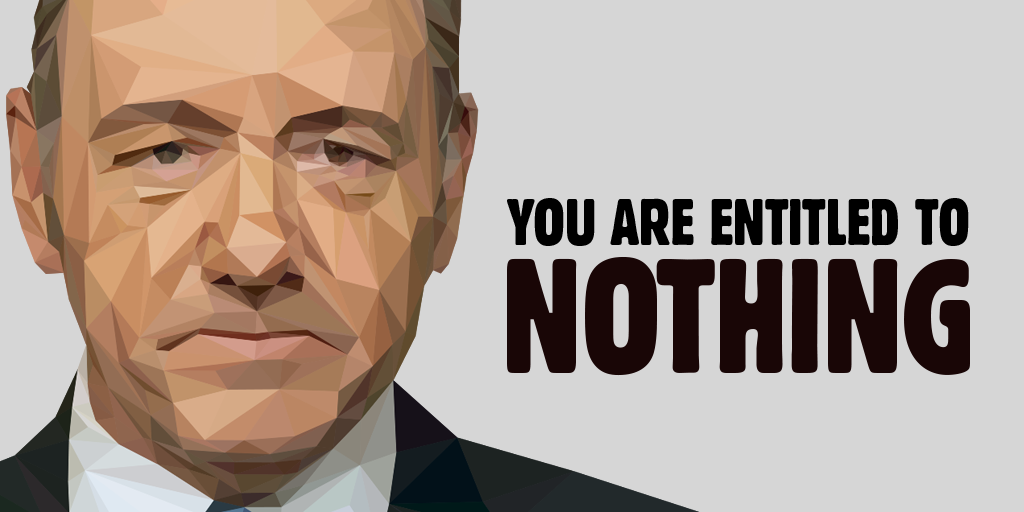 Though there will be an outcry from players about the play-to-pay equation becoming unbalanced, the price of PLEX will keep rising to meet the demand for the item.  But as the price rises, I expect to see a whole host of related behaviors feed back upon themselves to drive the frenzy and will make the peaks and troughs hard to nail down.
In short, I think the current peak is unsustainable right now.  However, a 1.3B-1.5B PLEX by the end of the year is absolutely possible.  To dream of the good ol' days of sub-800M PLEX is as foolish as predicting 2B+ PLEX.  I think to expect a band from 1.1B-1.3B for the quarter is a reasonable expectation.

A Prediction In Parts

I expect Q4 to be split into two halves.  Now to Thanksgiving (US), and then the rest of the remaining year.  This is similar to last year's predictions where I expect positive trends through November, as it is traditionally a busy time in gaming.  Then when December hits, I expect negative trends as play tapers off paired with expected sales.  The trouble is picking a starting point for the predictions, but I based off the 60-day moving average to avoid starting in unrealistic territory. 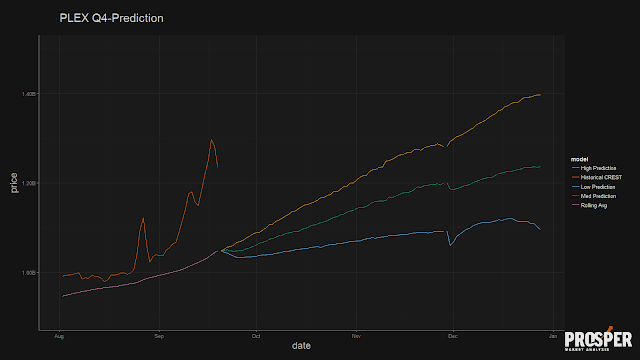 To briefly sum up, I believe we will continue in a positive realm to a steady price of 1.3B (+10%), then see a back off to 1.2B (-10%) to end the year.  Again, it's really hard to predict prices with the recent wild swings, but I based the behavior off the similar period last year.

Also, I'd like to note that 2 of the last 4 weeks triggered price flags in the Prosper toolset, which is strong indication of instability.  The only times I've seen PLEX trigger these models were before big action on CCP's part (ISboxer bans).  I can't know what CCP is doing behind the scenes, but I'd bet on something popping the bubble sooner rather than later.

We are in unstable territory to be generating predictions in, but the net direction of PLEX over history is up.  Also, say what you will about the health of the game vs PLEX, the honest truth is as long as people are willing to buy and [over]valuate PLEX, the price will climb.  We were on a positive trajectory before the ISboxer changes last year, and CCP's rule change eset the general demand to consume PLEX.  Though we can't know actual PLEX consumption rates, a traditionally busy Q4 paired with AUR consumption may drive us closer to the high-line than the low one.

Also, for as much work as this was to generate, I'm going to keep the making of to another blog.  Stay tuned here and on the EVE-Prosper Market Show for more information as it develops!

YouTube
Twitch - Live Fridays 0200
Support us on Patreon
Posted by Unknown at 7:00 AM

Email ThisBlogThis!Share to TwitterShare to FacebookShare to Pinterest
Labels: code

I think you've missed out on a fourth point: Demand will fall as PLEX becomes too expensive. Casual players who can't afford the time cost to grind for PLEX will subscribe or leave.

Which way the split falls will be interesting. Casual players are, by definition, casual. Are they invested enough to spend real money on their casual hobby? How many of them will find the prospect of spending real money on a formerly self-sustaining hobby unattractive? If PLEX prices reach 1.5 billion (a 'big' marker), will people leave?

If the 'average' income is 40mil IPH, it becomes almost 40 hours of playtime to reach that PLEX. Is that really "casual"?

I suspect that there are a lot of people coasting off reserves of wealth at the moment. I know I am. When those reserves run out, will I be bothered to keep playing? Possibly not. I'm probably representative of those people.

Eve's pleasures are fleeting and esoteric. Are they enough? EVE's most important resource is players. When casual players leave, how many hard-core players will remain. Will they be enough to sustain their own fun or EVE's costs?

I disagree that players abandoning the market is a strong indicator worth considering. The same wailing was going on when we crossed 800M and moved to 1B.

I do agree that the play-to-pay model is looking pretty terrible, but I expect the effect to be reflected in the #1 point of "Liquidity Squeeze" as players try to hold onto their FTP experience at the expense of actual play.

Will probably cover this more in a follow up blog, but more players need to think about which is more valuable: $$$ or time. As long as time is cheap, PLEX will keep rising. Not until people either convert their subscription to money, or quit entirely, will we see any abatement in PLEX prices.

If demand falls because PLEX is too expensive, then PLEX will fall in price.

The rise or fall of PLEX can each be a bad or good thing.

If PLEX prices rise because no one wants to use cash for PLEX, and they are using in-game ISK to buy PLEX this is bad. If PLEX prices are rising because a ton of people need PLEX to continue playing and they are playing EVE a lot to generate ISK, this is very good.

To me, it all depends on the rationale for the price change in PLEX. the fact that the price of PLEX is rising or falling is in itself meaningless, without the context of the total number of plex that are being used to fund subscriptions.

In all honesty, you know this better than me, so my scattered thoughts probably have less or no meaning.

I think the difference between 800-1000 mil and 1500 mil is the scale of it in people's minds. I never minded grinding 800 mil because it wasn't a billion. When you reach 1.5 bil the roundness of those digits makes it seem larger.

There's probably a word for that phenomenon I don't know. Like with the decimalisation of sell orders.

I expected a harder ceiling at 1B honestly. Also, I think 1.5B is still a very hot/fast price and I have a hard time charting out to there.

Though there is a factor of people giving up, I think we're closer to a boiled-frog kind of thing rather than straight outrage. If L4/mining won't make it, incursions still can. If ratting isn't cutting it, maybe an alt can do something different. People are still accepting the price rather than walking away from the market. So it is possible I've underestimated the final acceptable prices and we could climb right out of my predicted band.

As a casual player I dropped interest in PLEX after 600 mark. Because it became just running mining operations to fund the extended play-time. I burnt just a couple more PLEX to consolidate 5 accounts down to 3, then allowed 2 to lapse subscription. I can say from where I sit, that L4/Mining will not suffice to float a 1B plus - unless it is the Sisters or maybe Thukker.

Back prior to the nerfs to Incursions and the up-tick to FW, some faction items such as Federation Webbers provided a reasonable profit for mission runners.

The only decent item from standard LP are various implants, particularly learning. As much as I wish for tags to be transferred from standard LP to FW LP - it is not going to happen. Plus weapon BPC should come in 6 runs - which is in-line with most high slot counts. But as recently raised at the CSM Summit learning implants are eventually slated to join learning skills as a chapter of history.

Incursions make isk at least 90mil per hour for a decently organised VG fleet. But it is a significant time commitment, which if lucky I can manage once or twice a year during some vacation. Still, I suspect that the "risk free" chants will one day receive traction with CCP. And further nerfs will decapitate the activity down to a tight core of die-hards.

At least my consolidated alts have PI to tick over. (cannot be bothered with R&D).

Plus my one remaining subscribed account is free to mine or mission or explore in-between RL quiet moments, without a care for the isk/hr. As long as I can to replace the occasional lost hull or invest in some mis-guided BPO, then I will keep logging in.

People who know how to take advantage of buddy referrals will be sinking their PLEX around December for multiple Christmas rewards. Since you're getting a bundle of free stuff in exchange for locking in every 30 days of playtime right now, the people who are fairly sure that they're still going to play months from now will be burning through PLEX as soon as the announcement hits.

Plex prices will continue to rise. The null sec cartels (that is, the ones that have stayed) have consolidated their positions, and their members have cranked up their ratting bot carriers in their uber-safe enclaves. Thanks to the CSM's lobby efforts, and a very friendly ear of CCP devs, these ratting bots are making cash in null sec never seen before by the rank and file of the cartels, even with the 25% tax rate.

Plex prices have no where to go but up, even with the decreased demand of the high sec player base as many more leave the game.

Thanks Your post is so cool and this is an extraordinary moving article and If it's not too much trouble share more like that.
Digital Marketing Course in Hyderabad

You have done excellent job Thanks a lot and I enjoyed your blog. Great Post.
Data Science Certification in Hyderabad

Great post happy to see this. I thought this was a pretty interesting read when it comes to this topic Information. Thanks..
Artificial Intelligence Course

Nice Post thank you very much for sharing such a useful information and will definitely saved and revisit your site and i have bookmarked to check out new things frm your post.
Data Science Course