After playing with Prophet, I wanted a way to distribute the data more publicly.  I could have just incorporated it into our R templates and made it part of the show, but I felt like that was unfair to the general public.

(Though it required a ground-up rework) I used the Flask Restful app we were providing for EVE Mogul.  Though this turned out to be a complete rewrite, I learned a lot about Flask and testing to make things go.

What They Don't Tell You

One of the biggest pains of self-teaching is it's very easy to learn enough to be useful, but not enough to be good.  And the Flask documentation is particularly bad about giving up the barebones of what does what, but totally forgets to sell a viable project shape, leading to a lot of pain later.

Since the original OHLC feed was based loosely off a work project (as a way to test out corners on my own time), it repeated a design flaw.  Turns out there's a very particular Flask shape, and deviating from it causes a lot of problems.

Some examples to avoid pitfalls:
By using the prescribed Flask structure, all the pieces from launcher to test make a lot more sense.  Particularly, testing was one of the more difficult pieces of the picture.

Because of the CPU-intensive operation of running predictions, I wanted to incorporate two features:
Though I'm happy to share the source, and open up to the community, I'm not ready for full-hog release.  TL;DR: There are a couple of Flask eccentricities, and gdoc integration could cause some serious issues.  Also, uncached performance can run north of 15s, which could cause issues for some platforms.

To help get around "walled garden" accusations, I've done a few things:
The goal is to get the content out to the widest audience possible, even if the raw data is a little unwieldy.  And due to my limitations as a developer, this is my compromise.

Predictions In The Wild

Though my API service is designed to give you soup-to-nuts everything you need to plot in the REST payload, Ethan02 over at Adam4EVE added his own DB to keep us honest.  I totally love this!  As of right now, it's still in their DEV branch, but expect to see more from them soon! 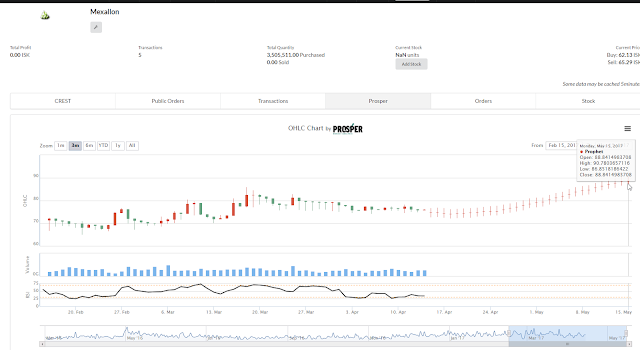 Extending the existing OHLC candlestick plot, EVE Mogul will let you keep close tabs on what you're currently trading, and this is an excellent chance to gut-check your investments.

Check out the source: ProsperAPI
Read the docs

I didn't get to share all the other super-nerdy #devfleet stuff (like travis-ci integration, or PyPI release).  I will probably try to release more notes on python stuff directly on Medium going forward.

This was an eye opening project in a lot of ways.  This opens the door for more micro-service REST stuff in the future.  Also, I do plan to have the PLEX split covered before CCP releases it on May 9th.
Posted by Unknown at 8:00 AM

In this game called EVE Echoes, players can buy EVE Echoes ISK on the MMOWTS website.

POECurrency.com is best site that can provide 100% Safe and Cheap Path of Exile 3.16 Currency. Buy POE Currency with Instant Delivery and Best Service.

Thanks for sharing this with so much of detailed information, its much more to learn from your article. Keep sharing such good stuff.동해출장샵
삼척출장샵
속초출장샵
원주출장샵
강릉출장샵
춘천출장샵
With the pandemic bringing down the scope of conventional advertising and marketing practices, digital marketing boomed and became the forerunner in the field of marketing.

The content was really very interesting. I am really thankful to you for providing this unique information. If you are looking for Gold Buying in Prosper contact KC Gold, Silver, and Rare Coins.